skip to main content
From Awareness to Accountability
Take Action 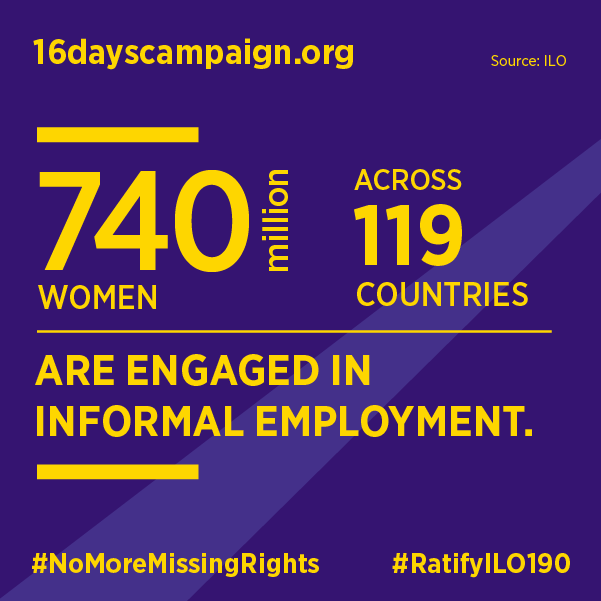 We are so excited to kick off this year’s Global 16 Days Campaign, the longest running campaign to end violence against women. In 2018, CWGL adopted a multi-year theme focused on ending gender-based violence and harassment in the world of work in order to build support for a new international instrument. In June 2019, the International Labour Organization (ILO) adopted the Violence and Harassment Convention C190 and the campaign shifted its focus to ratification. Before the first anniversary of its adoption on June 21, 2020, Uruguay and Fiji became the first two countries to ratify the convention which will come into force in June 2021. Today, Argentina is on its way to being the third.

In 2020, the campaign continues to call for the ratification of C190, but with a dedicated focus on informal women workers whose lives and livelihoods have been acutely impacted by COVID-19 and the unprecedented economic crisis that has followed.

The Global 16 Days Campaign, launched by the Center for Women’s Global Leadership (CWGL) at its first Women’s Global Leadership Institute in 1991, has been used worldwide to call for the elimination of gender-based violence (GBV). It is run annually from November 25 (International Day Against Violence Against Women) to December 10 (International Human Rights Day). In 2018, a multi-year theme focusing on ending GBV and harassment in the world of work was announced by CWGL to coincide with the adoption of a historic new ILO Convention with the same focus.

In 2020, the Campaign will increase its efforts to amplify the voices of women workers in the informal economy while continuing to call for the ratification of ILO Convention 190 and to end all forms of GBV in private and public spaces.

Learn more about the 16 Days Campaign and its areas of work here. Get the 2020 Social Media Toolkit! The ongoing COVID-19 pandemic has undeniably emphasized and amplified existing inequalities and vulnerabilities for women and girls around the world.  The internet is abuzz with reports of the devastating impact of the pandemic and public health measures that have been This event has been postponed to 2021. For any queries or further information, please contact Melissa Upreti at mupreti@cwgl.rutgers.edu. The Global Dialogue provides women the ability to highlight their experiences in the world of work and amplify the demand for By Alana Dave International Transport Workers’ Federation (ITF) “As women workers, we want access to information and training.  We want equal pay for equal work.  We want women on all decision-making bodies.  And protection against any form of violence.  We

As part of our ongoing series of profiles on Global 16 Days Campaign allies and feminist leaders, we interviewed the Fiji Women’s Rights Movement (FWRM), a feminist human rights organization that has worked extensively on promoting women’s human rights through On July 22, 2020, the UN Working Group on discrimination against women and girls[1] hosted a webinar to launch their new thematic report on women’s human rights in the changing world of work. This report is the Working Group’s eighth

16 Days Around The World

This interactive map features 16 Days events from around the world. If you would like us to promote your events and activities, please fill out an event submission form.